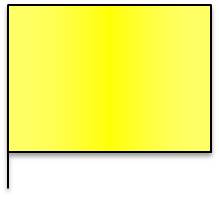 Yellow flag is waved at the observation post previous of the scene when the car stops on the course or stucks on the gravel. The display of the yellow flag is performed by waving. 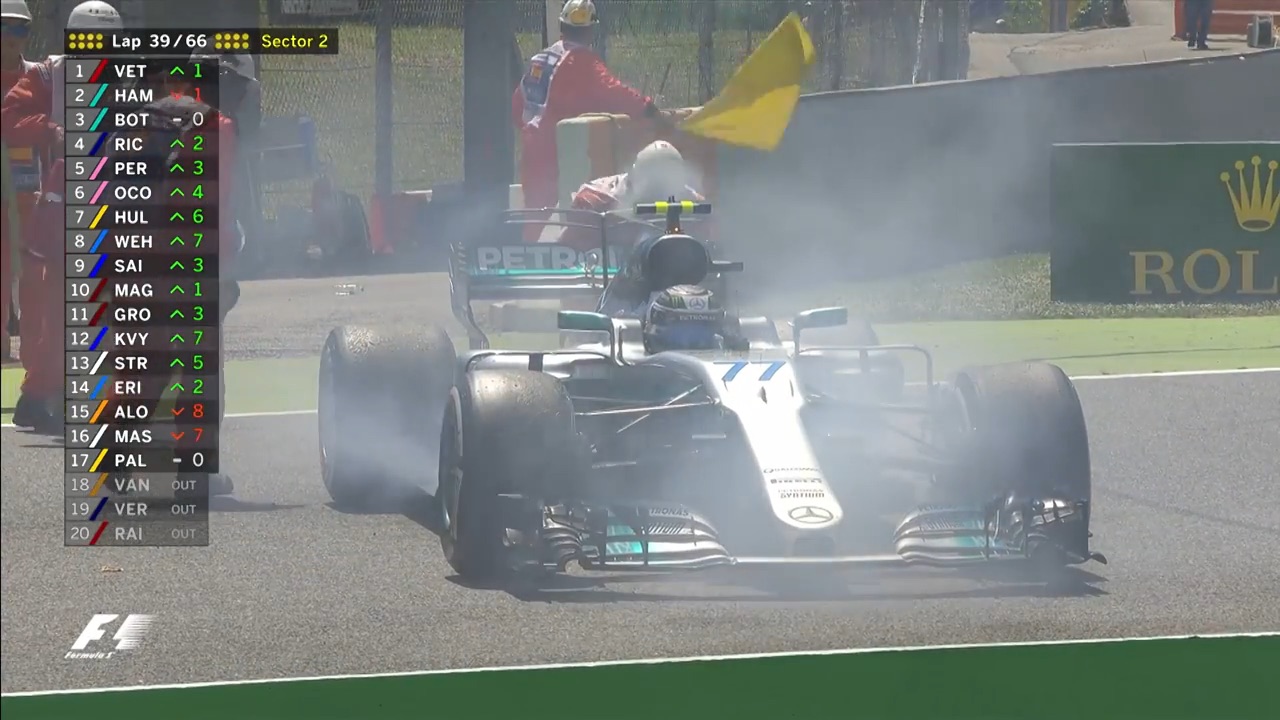 This is a signal of danger and should be shown to drivers in two ways with the following meanings:

– Single waved: Reduce your speed, do not overtake, and be prepared to change direction. There is a hazard beside or partly on the track. It must be evident that a driver has reduced speed; this means a driver is expected to have braked earlier and/or noticeably reduced speed in that sector.

– Double waved: Reduce your speed significantly, do not overtake, and be prepared to change direction or stop. There is a hazard wholly or partly blocking the track and/or marshals working on or beside the track. During free practice and qualifying, it must be evident that a driver has not attempted to set a meaningful lap time; this means the driver should abandon the lap (this does not mean he has to pit as the track could well be clear the following lap).

Yellow flags should normally be shown only at the marshal post immediately preceding the hazard.

In some cases, however, the Clerk of the Course may order them to be shown at more than one marshal post preceding an incident.

Overtaking is not permitted between the first yellow flag and the green flag displayed after the incident.

Yellow flags should not be shown in the pit lane unless there is an incident of which the driver should be made aware.
The Clerk of the Course or Race Director may impose a speed limit on the full course or any section of the track when double yellow flags are displayed during practice, qualifying practice or races.

• When a single speed limit is imposed on the full course, this will be indicated with a single yellow flag and a board indicating FCY (meaning “Full Course Yellow”). If appropriate, double waved yellow flags will continue to be displayed at the post prior to the incident.

• At races where a variable speed limit may be imposed on the full course, this will be indicated with a single yellow flag and a board indicating VSC (meaning “Virtual Safety Car”.) If appropriate, double waved yellow flags will continue to be displayed at the post prior to the incident.

In every case, the end of the imposition of the speed limit will be indicated by a green flag at the next marshal post, or at each marshal post where appropriate. The sporting regulations for each race or championship may provide for the enforcement of these requirements.

If there is a danger on the side or part of the course, single yellow flag is waved. 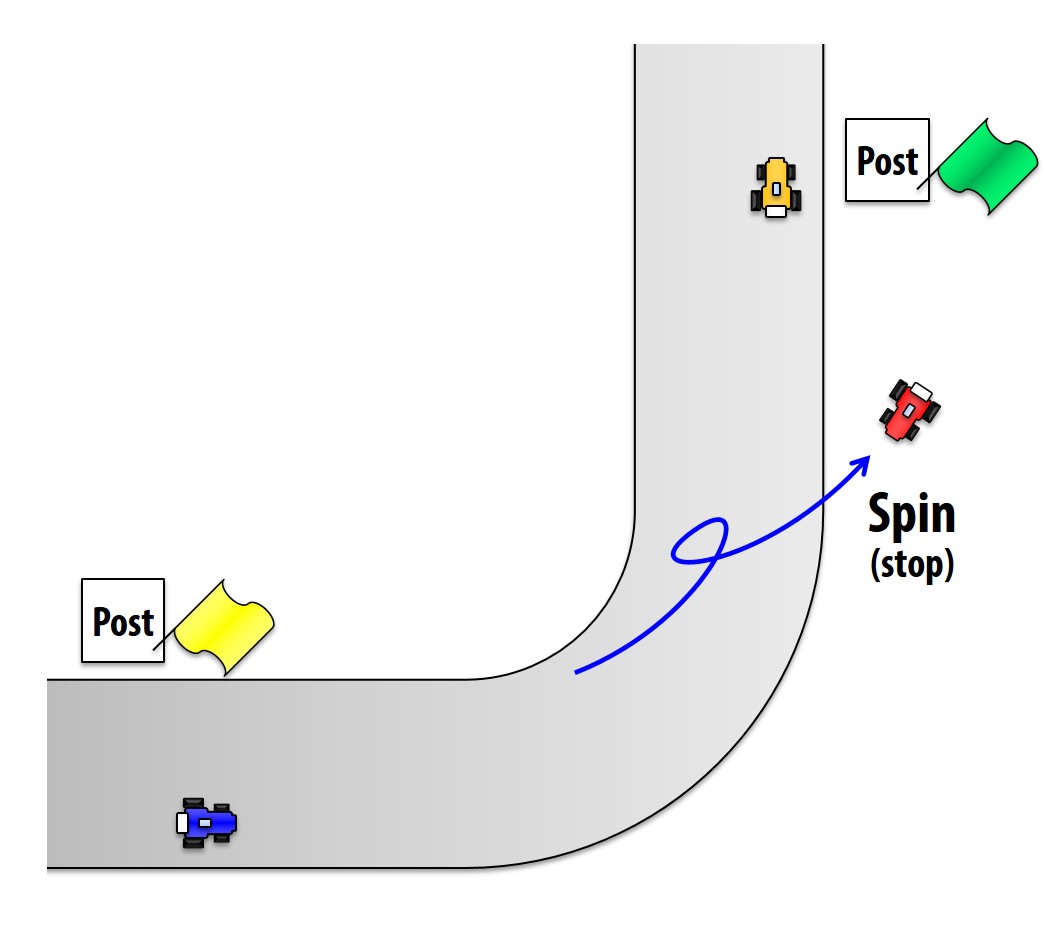 Double yellow flags are waved in case the car is stopped or partially blocked on the course. Drivers must slow down significantly and be prepared to stop immediately.

The situations which double yellow flags are waved may be as follows.

In case the course is blocked or in danger, double yellow flags are waved. 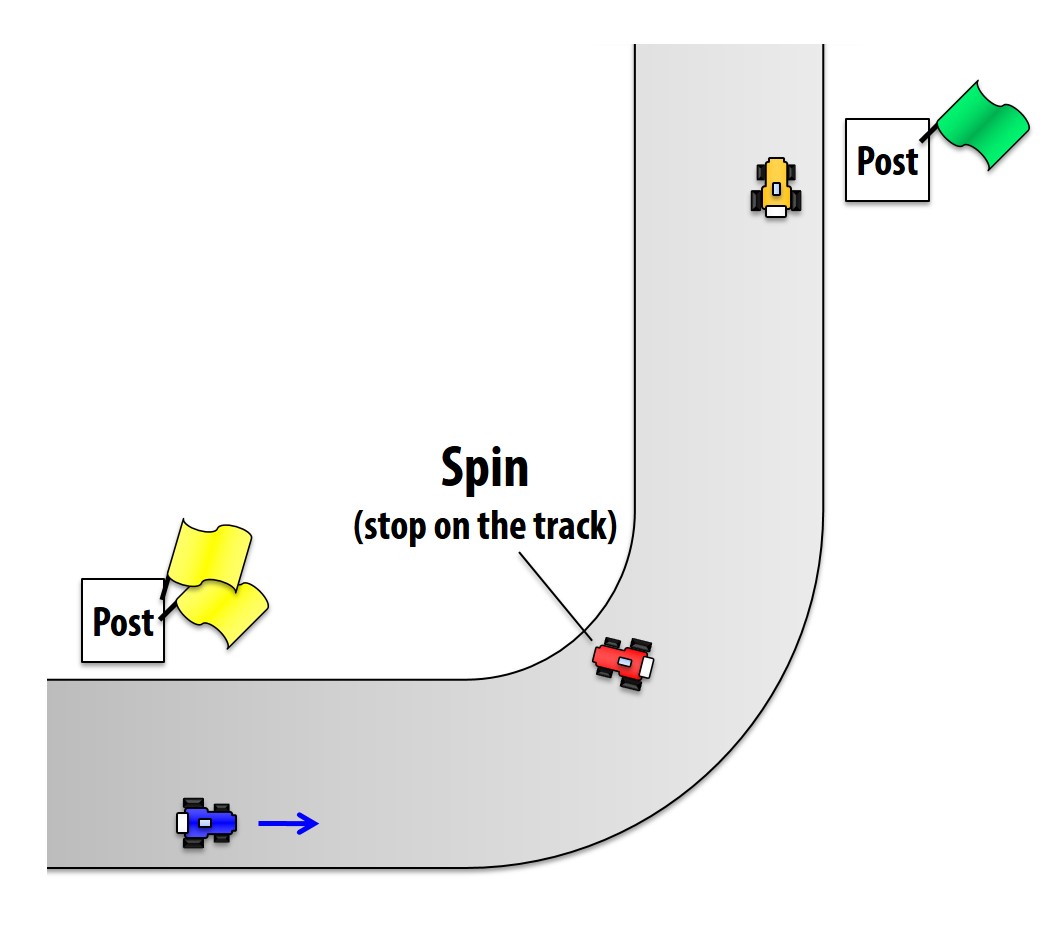 Course marshals are engaged in removing stopped car on the side of the course. 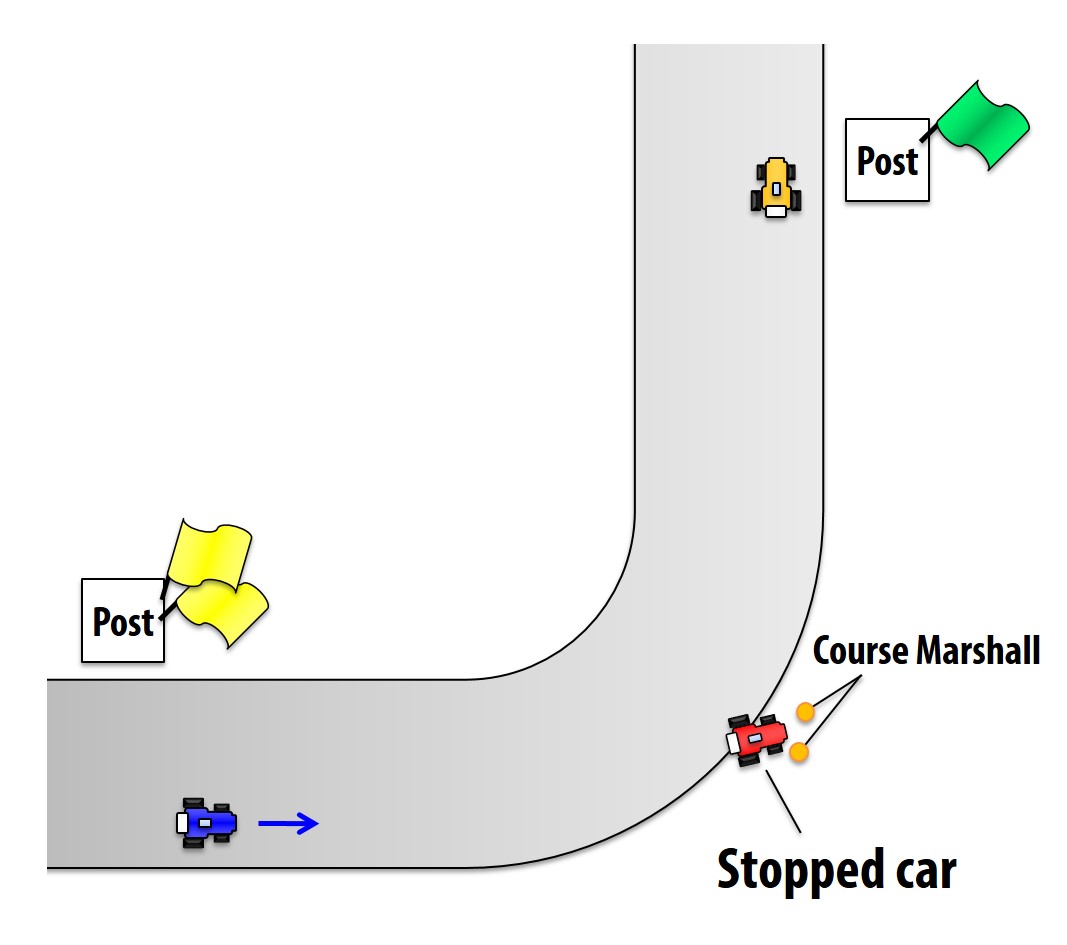 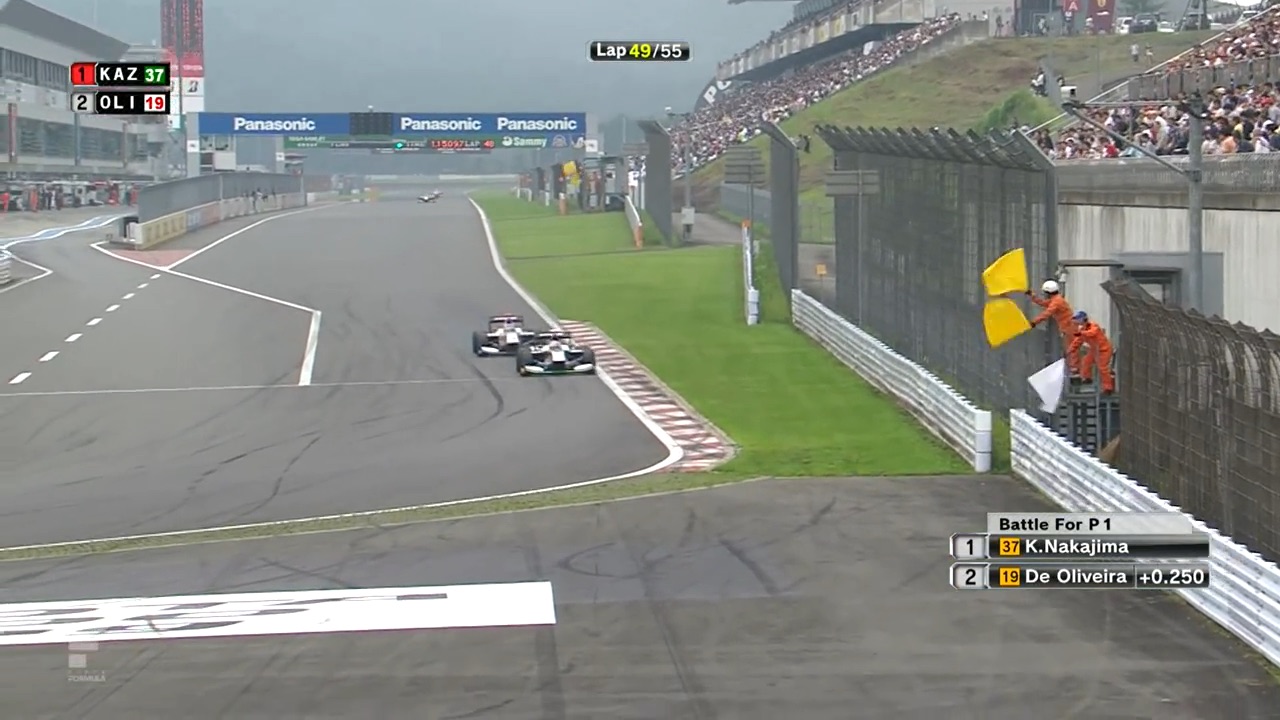 In case yellow flag is waved

Overtaking is prohibited in the yellow flag zone.

The section from yellow flag to green flag is defined as the yellow flag zone, and overtaking is prohibited. 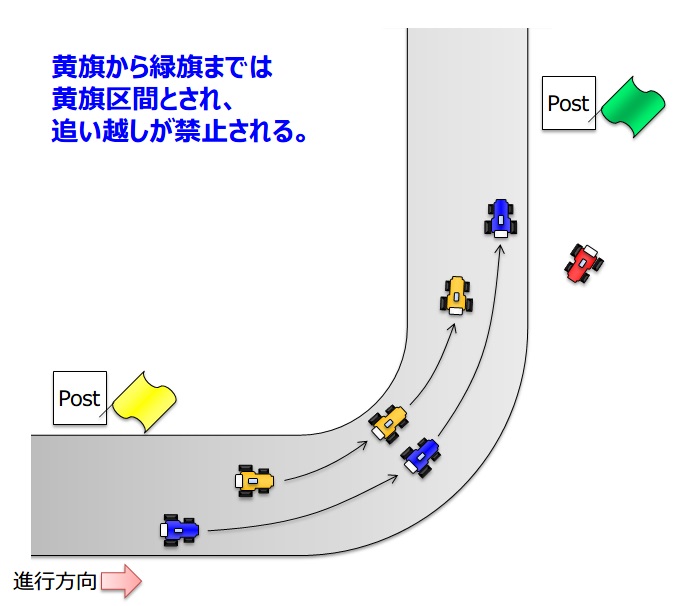 Judgement for overtaking in the yellow flag zone

The driver of the car that passed in front of the observation post at the moment yellow flag was waved was determined to have difficulty confirming yellow flag, and it may not be imposed the penalty.

The background of the judgement was explained by Mr. Naoki Hattori, DSO (Driving Standard Observer) of SUPER GT, in the TV program “SUPER GT PLUS”. 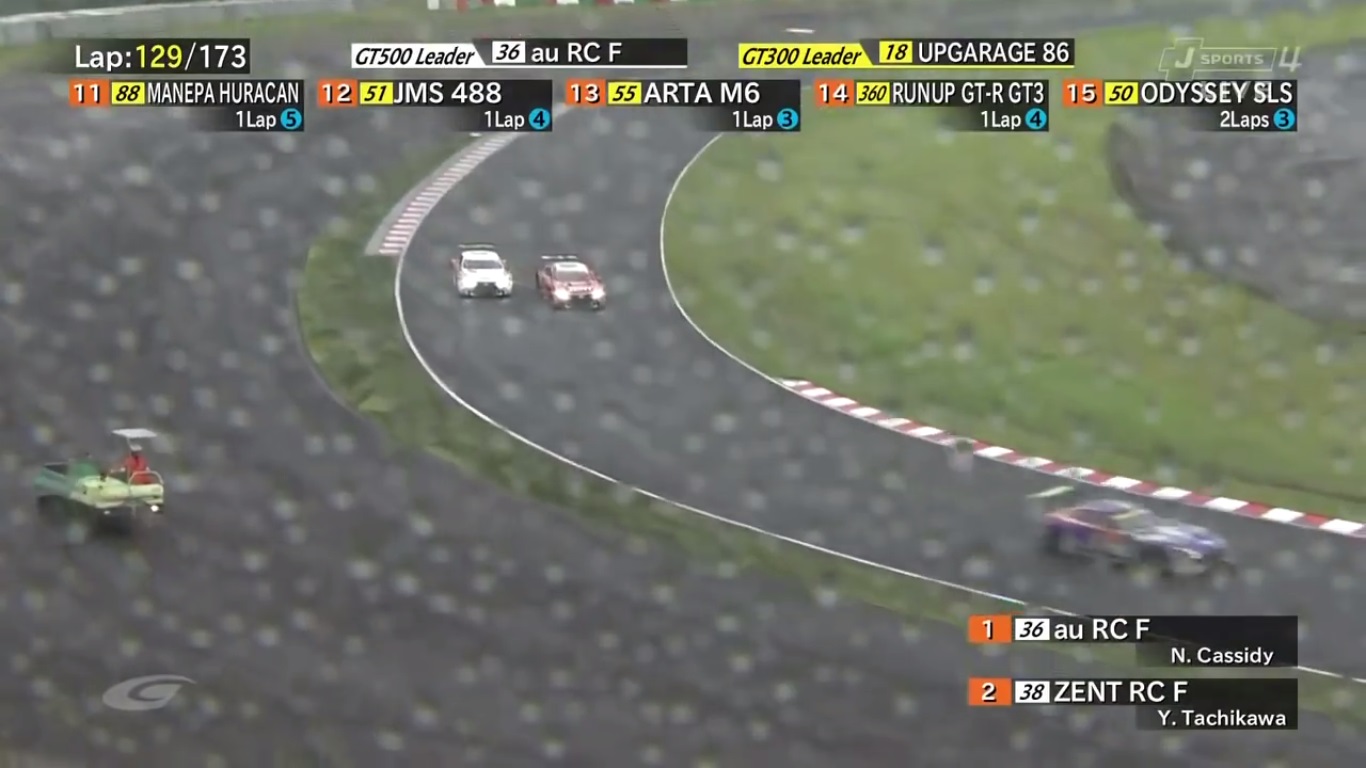 Violation of deceleration obligation in the yellow flag zone

Race control considers that spin and overrun should not occur if the drivers are driving at reduced speed. Also, if you step on the curb near the accident site, it is imposed penalty for violating deceleration obligation. 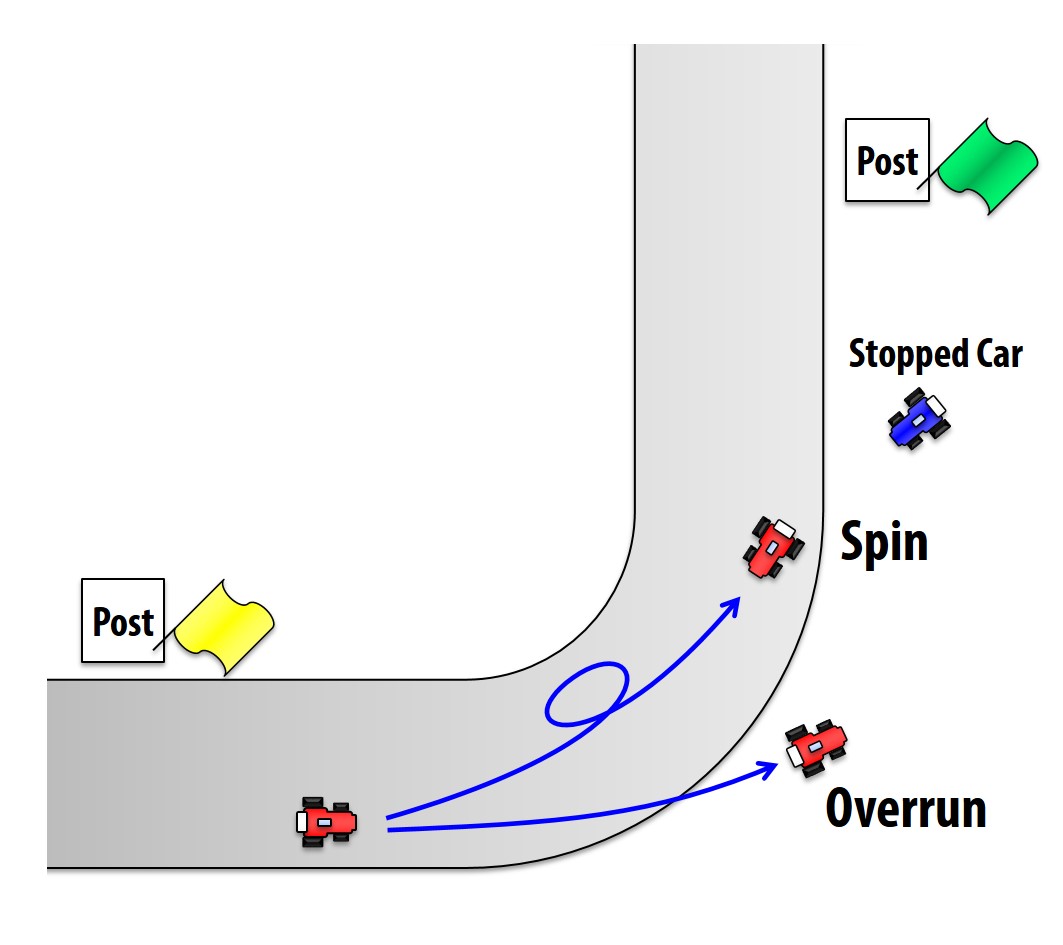 In the Appendix H International Sporting Code issued by FIA on December 22, 2017, words were added to the description of single waved and double waved, and deceleration in the yellow flag zone was spelled out.

Even if the stopped car is not completely removed from the course, yellow flag may be removed when race control judges that it is safe, such as on a gravel away from the course or inside the corner etc. Operation varies by race series and circuit.

Race director can order the waving of yellow flag from several previous observation posts of the accident site. It is operated to ensure that the car slows down in case there is a serious danger on the course.

Specifically, there are the following cases.

Normally, oil flag is displayed for fallen objects. However, in case the fallen object is very big and it could be dangerous to the cars, yellow flag is waved.

Operation when the red flag is waved

On the formation lap, green flag is waved at all observation posts, but it is common to wave yellow flag at the observation post just before the grid to encourage deceleration. 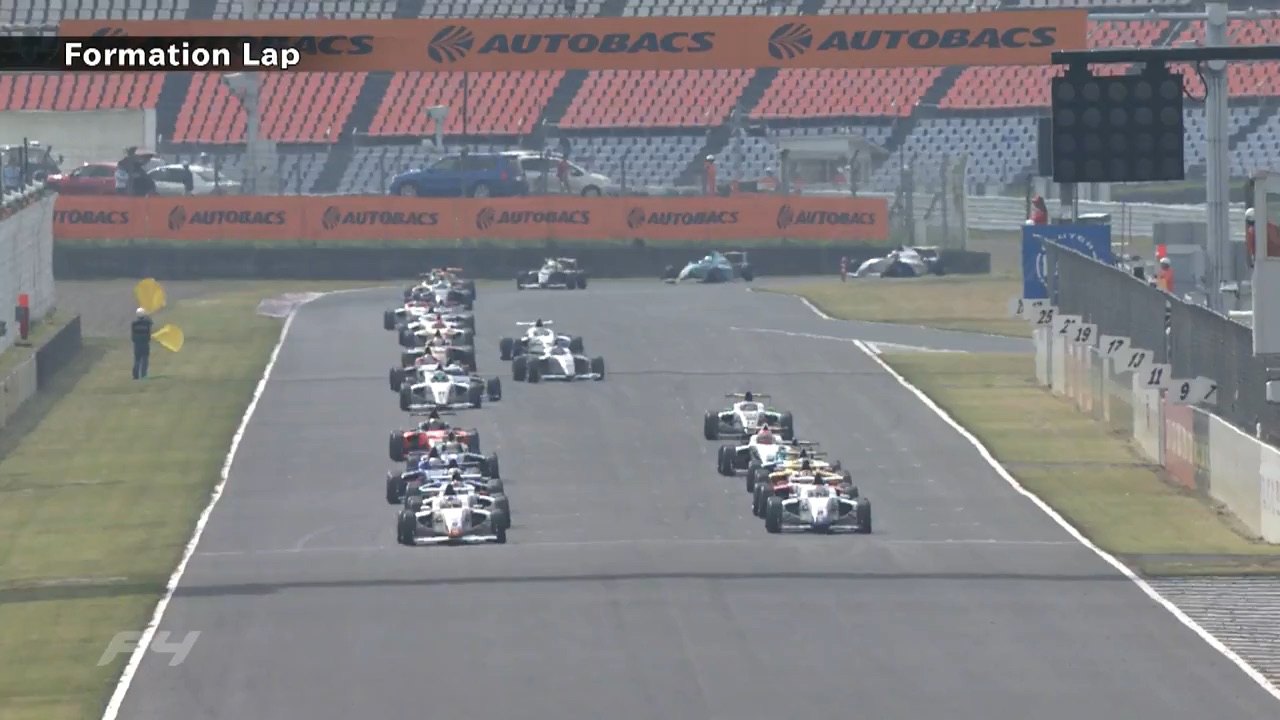 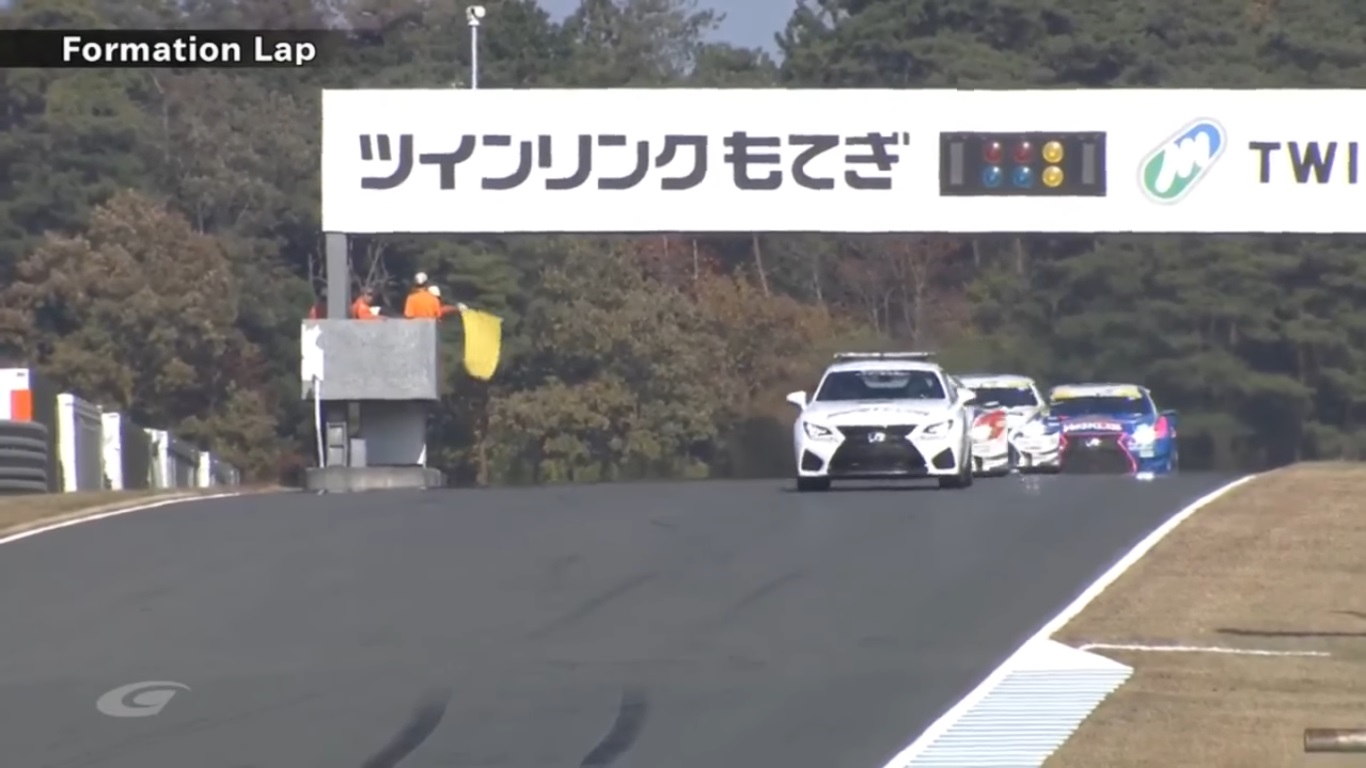